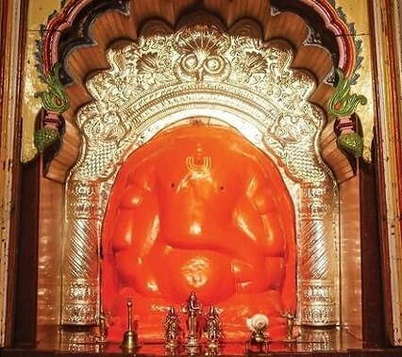 The Vighnahar Ganpati Temple or also known as Vigneshwara Temple of Ozar (Ojhar/Ojzar) is a Hindu temple dedicated to the Lord 'Ganesha' or 'Ganpati Bappa' Son of Lord Shiva and Parvati, the elephant-headed god of wisdom. The Vigneshwara Temple or Vighnahar Ganpati Temple is popular for its Golden dome (Sonayacha Kalash) and its Deepmala's (a stone pillar). Among Ashtavinayakas Temples, Vighneshwara temple is the only temple with have a golden dome (Sonayacha Kalash) and pinnacle.

Ozar is prescribed to the seventh temple to be visited in the Ashtavinayak Darshan tour or yatra. The 'Ganesha' form of worship here is called Vigneshwara/Vigneshvar/Vigneshwar - 'Lord of obstacles'. Vignahar/Vignahara - 'Remover of obstacles' and is associated with the legend of Ganesha defeating Vignasura, the demon of obstacles. The deity is depicted accompanying his two consorts Siddhi (spiritual power), and Riddhi (prosperity).

Ozar is situated on the banks of Kukadi River close to the Yedagaon dam built on it. This Ganesha temple is one of the Ashtavinayaka yatra, the eight revered shrines of Ganesha in Maharashtra State, India. Ozar (Ojhar/Ojzar) is located about 85 km from Pune city, off the Pune - Nashik highway (NH 60 Highway) and about 9 km north to Narayangaon. The distance of Ozar to Nashik (Nasik) is 145 km via Nashik-Pune NH60 Highway.

The temple celebrates the usual festivals associated with Ganesha: Ganesh Jayanti and Ganesh Chaturthi. At the time of Ganesh Jayanti, the temple decorated with flowers and lightings. Millions of peoples are visiting here for Ganesh Darshan in Ganesh Jayanti. In addition, a five-day festival starting on Kartik Poornima is also celebrated when the Deepamalas are lit. In the events or Ganesh Jayati days, lots of small shops here for shopping and the sweet Prashad (Pedha) of Ganesha.

The holy event of 'Bhadrapad Shudh Chaturthi' and 'Magh Shudha Chaturthi' are celebrated with pomp by peoples from all the villages, cities and areas by coming together. There is a beautiful lightening (Deep Mala) arrangement during that period.The festival of Bael Pola (Bullock Festival) is also celebrated in a similar fashion in which the traditional high seat is given to the bulls of the person quoting the highest at the auction.

The Vighnahar or Vigneshwra Temple Ozar was constructed in the era of the Peshwas. The structure is an epitome of Vastushastra (Architectural Science). The Ozar Vighneshwara Ganpati temple was built in 1785. In 1967, it was rebuilt by 'Shri Appashastri Joshi'. Shri Appashastri Joshi was an ardent devotee of Ganesha. Now the temple members and trust maintaining, renovating the temple very nicely.

Ozar Vigneshwara/Vighnahar Ganpati Temple By Road:
Ozar is in the Junner Taluka in Pune District. Pune-Ozar distance is 85 km. On the Pune- Nasik Road on passing through Chakan, Rajgurunagar, Manchar, one comes to the towns Narayangaon and later to Junnar. Ozhar is 8 km from both Naryangaon and Junnar. There are many buses that travel on a regular basis to the Vigneshwara Temple Ozar. Also, the distance of Ozar to Nashik/Nasik is 145 km via Nashik-Pune NH60 Highway.

Ozar Vigneshwara/Vighnahar Ganpati Temple by Train:
Pune and Talegaon are the two nearest Railway Stations and after that, another option is Kalyan Railway Station. The Pune station connects to major Indian cities.

Ozar Vigneshwara/Vighnahar Ganpati Temple by Air:
Pune Lohegaon Airport, around 10-12 km from Pune, is the nearest airport. This airport is connected to all the domestic airports in India.

Distance from Ozar to other Ashtavinayak temples

Get More Details of Ashtavinayaka Temple 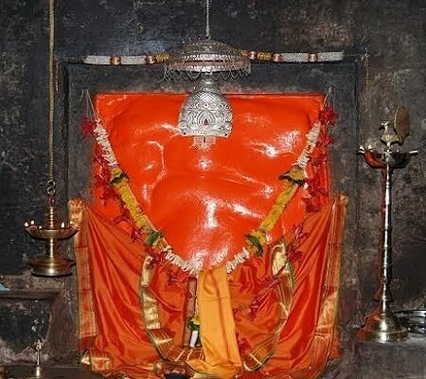 Girija's (Parvati's) Atmaj (son) is Girijatmaj. Girijatmaj Ashtavinayak Temple is the only temple of the Ashtavinayak which is on a mountain and is built in the locale of Buddhist Cave.The temple hall is 53 feet long, 51 feet wide and 7 feet in height.